Celsius® Burns Up to 100 Calories or More Per Serving

Celsius® burns up to 100 calories or more per serving 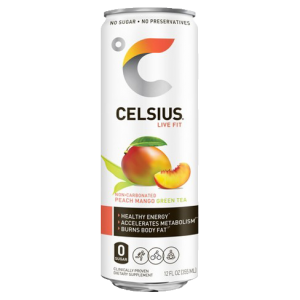 Most drinks only say what they do for you, but the calorie burning Celsius® continues to back their brand with science. The scientifically-formulated, calorie burning beverage not only burns up to 100 or more calories per can, but enhances the benefits of moderate exercise, according to the latest clinical study, the company announced today.

The Metabolic and Body Composition Laboratory of the Department of Health and Exercise Science at the University of Oklahoma recently announced the results of the 4th scientific study of Celsius® that showed that consumption of Celsius® as a pre-workout beverage resulted in dramatic improvements in the benefits of exercise among a test group of previously sedentary individuals. The first phase of the study showed that drinking a single 12 oz. can of Celsius per day for 10 weeks dramatically improves the benefits of light to moderate exercise. The test subjects consuming Celsius® lost significantly more fat mass and gained more muscle mass than subjects drinking placebo, and significantly improved their cardiovascular endurance during exercise.

“This study suggests the Celsius provides a significant, additive adaption to the benefits of regular exercise,” states Jeffrey R. Stout, Ph.D., who served as the Chief Researcher on the study.” He adds, “Now it can be scientifically supported that, by consuming a pre-workout calorie burning beverage, a person can improve their response to exercise; however, these claims are unique to Celisus®”.

Celsius® drinks are powered by Metaboost™, a proprietary blend of ingredients including Green Tea with EGCG, Ginger, Caffeine, Calcium, Chromium, B Vitamins and Vitamin C. Scientifically shown to raise metabolism over a three-hour period, consuming Celsius® results in a sustained calorie burn while keeping you energized.

Find retail suppliers for Celsius in your area by visiting www.celsius.com